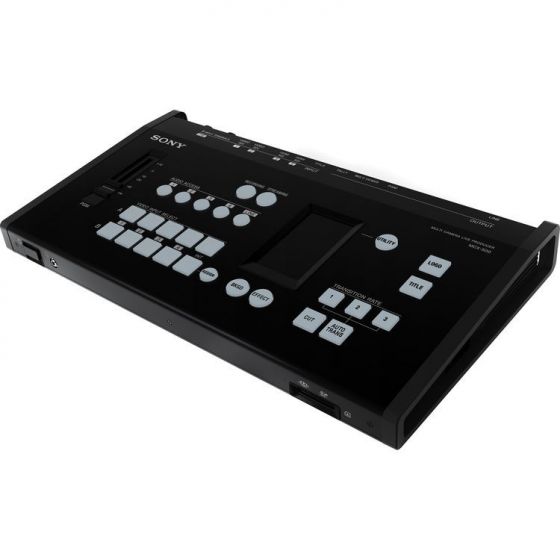 The MCX-500 is an affordable, uniquely user-friendly and flexible production switcher that makes it simple for a single operator or small team to produce a broadcast quality live event. Multiple video inputs include professional 3G-SDI, HDMI, Composite Video plus dedicated DSK mean you can mix and match kit as needed for each production.

Sony's MCX-500 4-Input Production Streaming/Recording Switcher is much more than just a portable four-input switcher. It is a global system that supports both 60 and 50 Hz production formats, so you can work with it virtually anywhere in the world. Buy Sony MCX-500 From UBMS . Shop Streaming/Recording Switcher from our Dubai showroom or order online . We can provide best and competitive price for Sony product and we will ship our product to Worldwide .

The MCX-500 combines a manual control surface with a touchscreen LCD that you can control locally or from a networked device. As you would expect from a professional mixer, cut, mix, wipe, and key effects are built into the unit. In addition to the program and multiview preview outputs, the switcher can also live stream to services such as Ustream via Ethernet, without requiring additional hardware. Likewise, the MCX-500 can record the program stream to an SD card, which is not included, via the built-in SD card slot. Beyond just the video switching capabilities, it is also a 5-channel audio mixer. You can control the switcher remotely via Mac, PC, or a tablet.

The MCX-500 features no less than eight video inputs (plus dedicated Title input) to easily accommodate small to medium-sized productions. Inputs include four 3G-SDI, two HDMI, and two composite video inputs, allowing you to connect a wide variety of cameras and other equipment.

Monitoring on the multiview output always displays the four selected inputs. It will also display the program and preview output on your monitor's screen in addition to the four inputs.

Tune your exact workflow requirements and map the LCD touchscreen control with ICON buttons, allowing you to trigger effects you've predefined with a single touch.

The MCX-500 allows you to easily create advanced video effects such as chroma key, transitions, and PiP (Picture-in-Picture).

The MCX-500 allows you to live mix the output of multiple sources with direct streaming in real time using services such as Ustream.

The MCX-500 supports sending tally signals to connected compatible camcorders. The tally indicator appears on each camcorder's LCD panel and Electronic Viewfinder. A red icon indicates when the shot is live (PGM), while green indicates preview (NEXT).