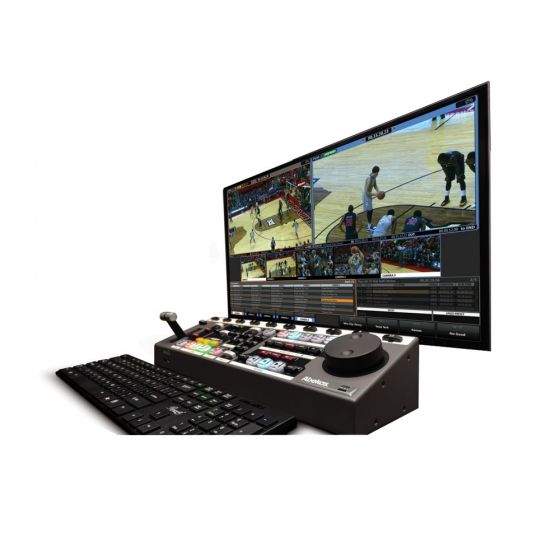 Be the first to review this product
$0.00
SKU
Ross Mira

4- or 8-Channel configurations: each channel transport instantly switches between Recorder and Player
Very simple and nearly instantaneous reconfiguration of Video I/O
Split and share channel resources between two operators
Mira server can also be used as a fully-functioned production server

Two Users can efficiently “split the tasks” while operating on one Replay Event — with one User focusing solely on Live Replay; while the other concentrates on clipping, tagging, highlights playlist creation and media file workflow
Alternatively, an 8-Channel Mira Replay server can be “divided in two” — with two users working on two separate events at the same time
Assign which camera inputs each operator works with, on a channel-by-channel basis
System extensibility permits Mira Replay to grow with your needs over time: upgrade from 4-channels to 8-channels; add more Mira Replay systems, and play real-time clips between Mira Replay servers via inexpensive Gigabit Ethernet network.

Exceptional single-display “Heads-Up” implementation for operators to easily capture and organize media content
Based upon widely-understood “VTR Transport” paradigm, but with shared clip storage
Every channel transport has its own dedicated RS-422 control port, along with Ethernet control over all channels
Even “Engineering Setup” utility is easy to use, while offering comprehensive server management
Easy-to-use system cuts down on training time for you, which can potentially expand the number of available operators.

10 softkeys results in fewer menu levels and makes for faster operation
All buttons logically grouped and color-coded for ease of use
T-Bar and rotary dial are on opposite ends of the Control Surface, to make operation more comfortable
Dedicated one-button access to the most often-used functions significantly accelerate operations
“Thin and Wide” design allows Control Surface to make more efficient use of valuable desktop space
One or two Control Surface panels can be connected to each Mira Replay server
Control Surface ergonomic comfort and ease of operation ensures your operators don’t miss any of the action

Support for Video+Key and multi-channel ISO grouping
Four- or Eight- Channel configurations available
Every video channel has ability to instantly switch between Recorder and Player
Slow Motion and optional Super Slow Motion replay support
The flexibility of the Mira Replay system makes it easy to change and adapt to the on-going needs of your productions.

Uses standard and inexpensive Gigabit Ethernet networking to interconnect any number of Mira servers
Shared clips can be “stand-alone clips” or can be clipped from either an actively recording Replay Event or from any previously recorded Replay Event
Remote clip content can be played across the network into a local Mira server from any remote Mira server
Remote clips can be freely trimmed by the operator—without worry of clip “guard-band” restrictions
Fast sharing of clip content permits Mira Replay to scale up for your larger and more complex live productions, as well as for use with Mira Production servers.

Media disk array has RAID-6 parity protection as standard feature
Up to two media disks can fail at same time, with no impact on server operations
Failed media disks can be hot-swapped with automatic rebuilding, also with no impact on server operations
Choose from two different media storage capacities
Rely upon predictable outcomes for your live productions any time—all the time.