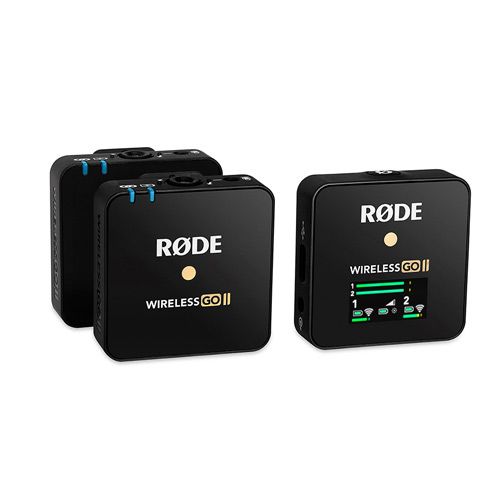 The Wireless GO II boasts a range of powerful features, including universal compatibility with cameras, mobile devices and computers, extended range (200m line of sight) and improved transmission stability, on-board recording capabilities, and much more. This is next generation wireless audio.

The Wireless GO II features two transmitters and a dual channel receiver that allows you to connect both transmitters for recording two sound sources into a single device. Out of the box, the transmitters come auto paired to the receiver and will remember which channel they’ve been assigned to, so you don’t have to worry about pairing them again.

The receiver’s LED screen is split into four main sections, with icons for battery life, signal strength and input level displayed for each transmitter on the bottom left and right, and icons for battery life, backlight mode and output gain for the receiver in the middle. Above this is an output level meter for the receiver, which makes it easy to monitor the levels going into your camera or recording device and ensuring your signal isn’t too hot.

Turning On and Pairing Your Wireless GO II

If a transmitter loses connection with the receiver, the blue ‘∞‘ LED on the transmitter will flash and the icons for that channel will go blank on the receiver, making it easy to identify which one you need to reconnect.

If you need to reconnect a transmitter to the receiver, press and hold the pair button (‘∞‘) on the receiver for three seconds to enable pairing mode, then single-click the power button on the transmitter and wait a few seconds.

The Wireless GO II utilises RØDE’s all-new Series IV 2.4GHz digital transmission with 128-bit encryption. This delivers an extended transmission range of 200 metres (line of sight). The Wireless GO II is optimised for extremely stable operation in environments where there is a lot of RF activity, including dense urban areas, shopping malls, universities, convention centres, and offices, so you can worry less about dropouts and focus more on what you're recording.

The Wireless GO II takes wireless versatility to new heights. Featuring a 3.5mm TRS analog output for plugging into cameras, plus a digital audio output via USB-C for plugging into smartphones, tablets and computers, it is perfect for content creation, filmmaking, on-camera or on-stage presentations, vlogging, YouTubing, livestreaming and more.

On-board recording means you never have to worry about dropouts or audio issues again, while the flexible gain control lets you precisely tailor the output to your device. The Wireless GO II also offers the option to record each channel separately or combine the two, ensuring ultimate flexibility in post-production. Looking for Rode Microphone supplier ? Contact UBMS, we can provide best price for all rode microphones. Rode Wireless GO 2 can purchased from from UBMS

The Wireless GO II offers the same pocket-sized form factor as the original Wireless GO. The transmitters and receiver weigh less than 32g, taking up virtually no space in a camera kit bag, backpack, handbag or briefcase. It also comes supplied with a handy carry pouch to keep everything tidy and secure. The Wireless GO II's unique clip design makes it quick and easy to mount onto clothing or a camera cold shoe, mobile camera rig, boom pole, or any cold shoe accessory – ultra-compact wireless audio for any recording situation. Shop Rode go 2 (rode wireless go 2 ) from UBMS .

Connecting the Wireless GO II to your smartphone or tablet via USB-C rather than using the 3.5mm analog TRS output gives you access to a number of useful features:

Headphone monitoring – Using the USB-C output frees up the 3.5mm output so you can plug your headphones in and monitor your audio while recording. You can even use the gain control to adjust the volume of your headphones.

The Wireless GO II gives you the option to record in either 'Merged' or 'Split' mode. This allows you to record each transmitter onto separate channels on the output or combine the two into a single output.

To switch between 'Merged' and 'Split' mode, press and hold both buttons on the receiver for three seconds and keep an eye on the output level meter on the LED screen.

When there are two meters, you are in 'Split' mode. This means that each transmitter's output is being recorded onto separate channels (left and right) on the Wireless GO II’s output, which can be processed individually in post-production. This is great for two-person interviews where you need to be able to edit and mix each sound source independently.

When there is just one meter, you are in 'Merged' mode. This means that the two transmitters are being combined into a single summed output. This is great if you’re only using one transmitter and want the audio recorded onto both channels of your recording device, or if you are using the safety channel (see below for more information). It also works well if you are using the Wireless GO II in a live presentation setup.