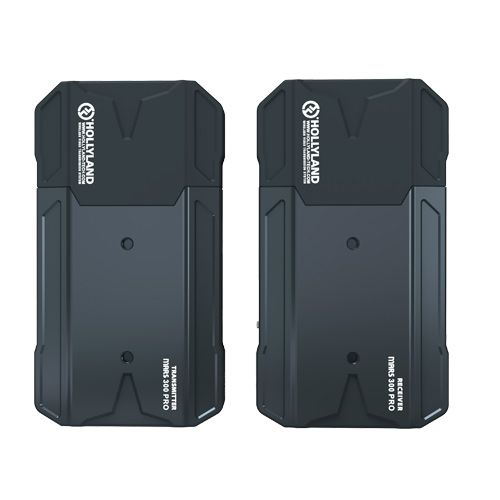 Add up to 1080p60 wireless video transmission to your gimbal, mirrorless, or DSLR camera rig using the lightweight standard Mars 300 PRO HDMI Wireless Video Transmitter/Receiver Set from Hollyland. This standard model features internal antennas on both the transmitter and receiver. The transmitter provides a single HDMI input plus an HDMI loop-out for viewing on an on-board monitor and the receiver provides two HDMI outputs. The transmitter features line-of-sight transmission up to 400' to the receiver and up to 300' to a Wi-Fi app.

Hollyland Technology has been very active in the filmmaking industry in recent years, especially with their introduction of entry-level wireless transmitters and wireless intercom systems to the industry. After MARS 300, which appeared to be the first prosumer wireless transmitter in the market, they continued with product launches of the MARS 400S series and MARS X prosumer wireless transmitters, MARS T1000 prosumer wireless intercom system, and along with their professional gear release of COSMO M7 and SYSCOM 421. And now, the MARS 300 PRO is here!  From the name MARS 300 PRO, it is pronounced that this is an updated product of the once-popular product MARS 300. Buy Hollyland Mars 300 Standard version from UBMS Dubai . We can provide best price and fast delivery for all Hollyland products

Using the Hollyview app for iOS or Android, you can monitor your video transmission in real time via a Wi-Fi connection. The transmitter can transmit to up to one receiver and two apps, or to a total of three apps, simultaneously. The transmitter and receiver are compact in size, feature a bright OLED display for configuration, and they each feature a 1/4"-20 mounting thread. Each can be powered using a USB Type-C source, or they can be powered using a separately available L-series type battery using their battery plates. The Mars 300 set also includes an accessory expansion plate, a shoe mount, and a USB Type-C cable.