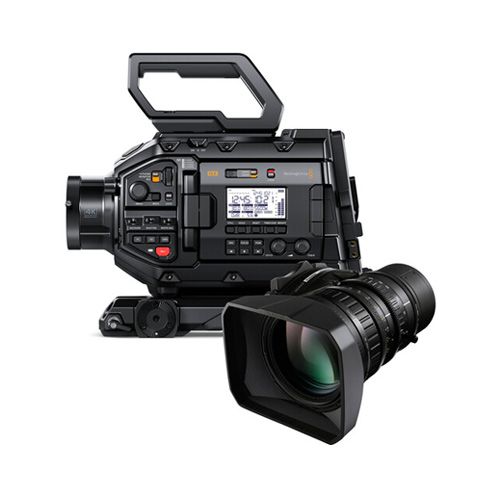 The world’s most flexible broadcast camera!

The new Blackmagic URSA Broadcast G2 is an incredibly powerful camera designed for both traditional and online broadcasters. The 3 cameras in 1 design allows it to work as a 4K production camera, a 4K studio camera or a 6K digital film camera! It's a perfect solution for broadcasters because it uses the lenses and batteries you already own! You can record to common SD cards, UHS-II cards, CFast 2.0 cards or external USB disks, using common file formats such as H.265, ProRes and Blackmagic RAW. This means it's compatible with all video software and broadcast media management systems. You can even change the lens mount! No other broadcast camera is so flexible! Buy Blackmagic Design URSA Broadcast G2 Camera from UBMS Dubai.

The perfect solution for broadcasters, URSA Broadcast G2 includes ENG camera controls positioned around the camera so you can locate them by feel. It also features a low light sensor so you get amazing images using natural light. That's the perfect combination for broadcast news and programming.

URSA Broadcast includes an advanced YRGB color corrector built in and full remote camera control. You can use B4 ENG lenses, large studio box lenses, or even change the lens mount and use any lens! Plus the optional Blackmagic focus and zoom demands let you control the lens from the tripod handles.

The large 6K sensor combined with Blackmagic generation 5 color science gives you the same imaging technology used in digital film cameras. This means broadcasters can now use digital cinema quality in broadcast! The 6K sensor features a resolution of 6144 x 3456 so it's flexible enough for broadcast and digital film work. When using B4 lenses, you get a 4K window of the sensor for Ultra HD broadcast use. Then if you change to a PL or EF lens mount, you can use the full 6K resolution of the sensor for digital film! With 13 stops of dynamic range, you get darker blacks and brighter whites, so it's perfect for color correction. Using digital film in broadcast is a revolution in image quality!

The new URSA Broadcast features incredible low-light performance, so you can shoot using ambient light or even under moonlight. In advanced cameras, ISO is a measurement of the image sensor's sensitivity to light. The Blackmagic URSA Broadcast G2 features gain from -12dB (100 ISO) up to +36dB (25,600 ISO), so it's optimized to reduce grain and noise in images while maintaining the full dynamic range of the sensor. The primary native ISO is 400, which is ideal for use under studio lighting. Then the secondary high base ISO of 3200 is perfect when shooting in dimly lit environments. The gain can be set via a camera switch, the LCD menu, or remotely using the SDI remote camera control protocol.

Compatible with B4 Broadcast Lenses

The URSA Broadcast G2 features a B4 broadcast lens mount that includes optics specifically designed to match the camera's sensor. The B4 lens mount lets you use modern UHD lenses or lower-cost HD lenses. Older HD lenses often feature resolutions well beyond HD, so you get great quality at a low cost. B4 lenses are fantastic because they are par-focal, so the image stays in focus as you zoom in and out, so you don't need to constantly chase focus as you shoot. That lets you work much faster. You also get full electronic lens control to adjust focus, iris, and zoom using the camera's controls or remotely. Plus, if you want to use alternative lenses, you can change the mount to PL, EF, and more.

URSA Broadcast G2 features high-quality neutral density (ND) filters that let you quickly reduce the amount of light entering the camera. The 1/4, 1/16th and 1/64th stop filters have been specifically designed to match the image sensor and color science of URSA Broadcast G2, providing you with additional latitude and better colorimetry. This lets you use different combinations of aperture and shutter angles in a wider range of situations. The IR filters have been designed to evenly filter both optical and IR wavelengths, eliminating IR contamination. Plus, the filter status on the LCD can be displayed as a fraction, number, or stop reduction.

URSA Broadcast is designed to work with standard file formats used by all broadcast systems and editing software. You can record in ProRes 422 HQ and ProRes 422 into QuickTime files. The new Blackmagic URSA Broadcast G2 model can even record into H.265 for incredibly small files at 60:1 to 285:1 compression ratios, in 10-bit broadcast quality. Plus. you can record to Blackmagic RAW files, a revolutionary new format designed to capture and preserve the quality of the sensor data from the camera. That means you get the perfect range of file formats designed for all types of workflows.

With dual CFast 2.0 recorders and dual SD/UHS-II card recorders, you can choose the media that's best for you. Both types of media are standard, inexpensive, and readily available at computer and camera stores. Plus, with dual media slots, URSA Broadcast gives you nonstop recording. When a card is full, recording automatically continues onto the next card, so you can swap a full card while recording continues. You get enough speed to record high-quality ProRes and H.265 video file formats, even when working in Ultra HD at high frame rates. That means URSA Broadcast G2 is easy to integrate into your existing broadcast systems. You can even record 12-bit Blackmagic RAW cinema files.

The Blackmagic URSA Broadcast G2 features a high-speed USB Type-C expansion port on the rear of the camera that allows you to record to external disks or connect to a wide range of accessories. If you plug in a large and low-cost external USB flash disk, you can record ProRes, H.265, or even high-quality 12-bit Blackmagic RAW files for later editing and color correction. That means you can just move the disk to a computer to work, and you don't need to waste time with file copying. Plus, the USB port will power the disk that's plugged in. You can even plug in optional focus and zoom demands to allow full lens control.

URSA Broadcast G2 features a super-strong, lightweight magnesium alloy body that's perfectly balanced and designed to be comfortable to use all day. It features familiar, externally mounted switches and controls that give you direct access to the most important camera settings. The controls are laid out logically, making them easy to locate by feel, so you can adjust settings without having to look at the buttons. You also get a foldout touchscreen for monitoring, viewing camera status, and changing settings using on-screen menus. URSA Broadcast G2 also includes standard 12G-SDI connections, XLR audio inputs, USB Type-C, and an industry-standard 4-pin XLR broadcast 12 VDC connection.

With a built-in LCD that folds out, you can both monitor and control the camera. While URSA Broadcast G2 features lots of physical buttons and knobs, using the LCD, you also get on-screen status and touchscreen controls. The built-in touchscreen also includes a heads-up display with the most important shooting information, as well as menus for all camera settings, LUTs, and custom presets. Behind the LCD, there are extra buttons, as well as knobs for audio levels. There are even programmable function buttons that can have functions assigned to them, such as zebra, false color, focus peaking, LUTs, and more. Plus, you can change the function assigned to each button in the on-screen menus.

The status display is a high-visibility LCD screen designed to be easily seen, even in bright light. The status display shows record, locked, and reference timecodes, along with the current shooting frame rate, shutter angle, aperture, white balance, gain, and iris. It also features a battery indicator, card recording status, and audio meters for monitoring levels. The screen's backlight can be turned on when you are shooting in dimly lit locations and off when you are shooting outdoors and in bright light to increase contrast, making it easy to read under any condition.

Digital film cameras shoot logarithmic color space to preserve the dynamic range, which is great for later post-production. However, when these files are viewed on a monitor, they can look flat and washed out. 3D LUTs solve this problem as they allow you to apply a "look" to the monitor so you get an idea of how the finished images will look when editing. LUTs can be applied temporarily for monitoring only, or they can be recorded into the Blackmagic RAW files for use in post-production. The URSA Broadcast G2 works with industry-standard 17- and 33-point 3D LUT files or you can work with the built-in LUTs such as Extended Video, Film to Video, Film to Rec.2020, and more.