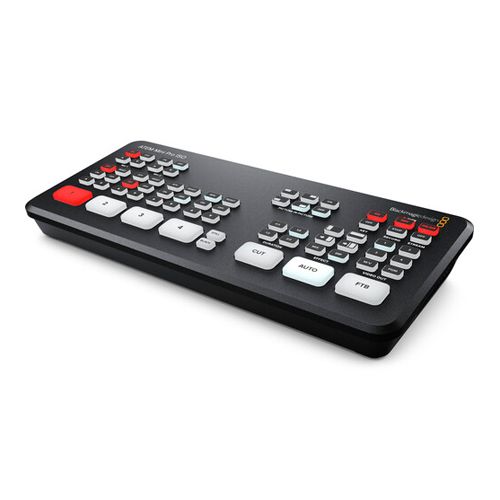 Blackmagicdesign
Be the first to review this product
$537.00
AED 1,969.00
In Stock
SKU
ATEMMINIBPRISO

New model adds a 5 channel recording engine to write all video inputs as separate video files for editing a live production after the event!

This model adds recording of 5 streams including all input as clean feeds for editing, plus a DaVinci project file for fast edit turnaround and Blackmagic RAW file relinking for finishing in Ultra HD. Able to reverse the USB-C and HDMI out functions.

The new model of ATEM Mini ( ATEM Mini Pro ISO ) is a true innovation in workflow. For the first time, live production has been fully integrated into a post production editing workflow. Not only that, but with Blackmagic RAW integration, we can use the ISO files recorded in the switcher, or the files recorded in the camera." said Grant Petty, Blackmagic Design CEO. "That's a RAW film workflow, a post production workflow and a live production workflow all fully integrated for the first time! Imagine doing an Ultra HD fully color graded master all from a tiny low cost HD switcher. It's really exciting and it's going to generate a whole new workflow for the television industry!

The ATEM Mini Pro ISO HDMI Live Stream Switcher from Blackmagic Design is a four-input live production switcher with an integrated control panel designed for multicamera live streaming up to HD video to the internet via Ethernet output. It features a USB output that allows you to record the program output as well as record the individual HDMI inputs to an external USB drive (not included). In addition to recording the program stream and individual inputs, the ATEM Mini Pro ISO also records the embedded audio and analog audio inputs, generating a DaVinci Resolve project file of your live stream. This allows you to take your live production into DaVinci Resolve to make tweaks or adjustments using the source material that is already on your USB drive.

The ATEM Mini Pro ISO retains the same size, button layout, and rear panel interface connections as the ATEM Mini Pro, with new electronics that allow for the ISO recording and generation of the DaVinci project file. The ATEM Mini Pro ISO supports all the same features as the ATEM Mini Pro including upstream and downstream keyers, an advanced chroma keyer, two linear/luma keyers, a DVE transition keyer, a pattern generator, and color generators. There is also media player support for fill and key images, which supports up to 20 stills in PNG, TGA, BMP, JPEG, and TIFF formats. The ATEM Software Control Panel is used for control and configuration, and it allows you to monitor the data rate, audio meters, configuration, and status of your live feed. And you can use the panel to set up streaming to an optional Blackmagic Design Streaming Bridge anywhere in the world, as long as it is connected to the internet.

Layer live video over other video sources or graphics with the upstream keyer. You can use the luma key, linear key, pattern key, or shoot against a green screen and use chroma key to instantly composite the video over virtual sets.

The ATEM Mini switcher includes one downstream keyer, so you can add high-quality graphics like logos, bugs, and titles from the built-in media player over the live stream program output. Downstream keyers are the last layers of keying, so they overlay all video switched to the main program output.

The built-in audio mixer lets you control both camera and external audio with precision level and balance adjustments on all six available audio inputs and two channels. The mixer features selectable on/off and audio-follow-video per channel, plus it has separate gain control per channel, level and peak metering, and new Fairlight audio enhancements such as compressor, gate, limiter, six bands of parametric EQ, and master gain control.

The HDMI monitor output allows you to see your sources, graphics, preview, and program output on a single screen.

Eliminate external character generators by storing up to 20 broadcast-quality RGBA graphic files in the media pool. The one media player appears as input sources to your switcher. You can transition to graphics as full-frame video, or feed them to the keyers for overlaying video. Popular image formats such as PNG, TGA, BMP, GIF, JPEG, and TIFF are supported.

Accessories
Write Your Own Review
or how about these?
Fllow us
By continuing to use this site you agree to our use of cookies, which allow you to sign in and manage your account, and add items to your cart.
Dismiss
Cookie Settings