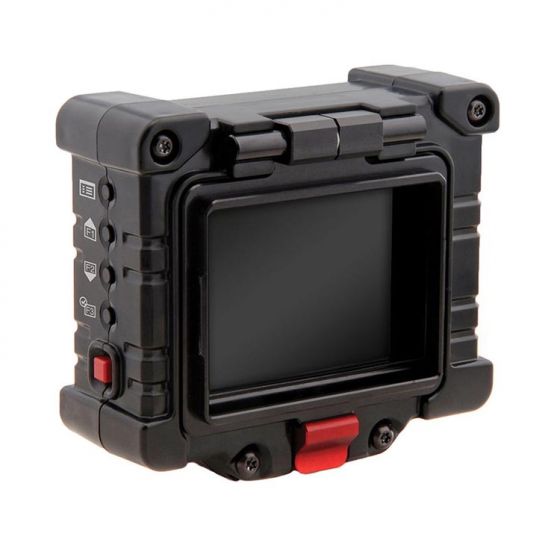 Zacuto
Be the first to review this product
$736.00
AED 2,702.00
SKU
Z-EVF-1F
Specifications
Size 3.2" (8cm) TFT LCD IPS LED Resolution 800 x 480 Color 16M Viewing Angle H: 170° V: 170° Screen Viewing Area 70.6mm (H) x 42.76mm (V)
Item Includes
Zacuto EVF Flip-Up Electronic View Finder 3.2" (8cm) Monitor HDMI Cable Rechargeable Battery Battery Charger Hotshoe EVF Mount 1/4 20" (51cm) Mounting Thread Black Sun Protection Disk
Features
The Zacuto EVF Flip-Up Electronic View Finder is a 3.2” (8cm) high resolution (384,000 dots) monitor that is compatible with all the Z-Finder models. Using the EVF Flip-Up, you can operate any camera that has an HDMI port, with the correct form factor for video with the camera "in-line" to the rod system and your eye in the Z-Finder offset. In addition to enhancing stability for better resolution, the EVF Flip-Up allows for a comfortable eye position that enables low-mode shooting. You can shorten your camera package, detach your EVF from the rig, and store it in a dolly or crane for car shots. Its built-in Z-finder frame flips up 180°. Flipping up the monitor allows you to share your shot with others. The EVF Flip-Up is compatible with virtually all cameras with an HDMI output, including the Canon C100/C300/C500, Sony FS100, Sony F3, Scarlet, Red One & Epic, Panasonic AG-AF100. Equipped with a scaling function, the EVF Flip-UP adjusts the aspect ratio, thus ensuring that the image fits the screen when using certain DSLR cameras. It features an HDMI type 'A' in, and an HDMI type 'A' loop out. In addition to enabling image view on the EVF's 800 x 480 screen, the feature also allows signal looping out to devices such as an external monitor or the Teradek Cube. Powered by an LP-E6 style battery, the EVF Flip-Up can run for 5.2 hours. Other features include Monochrome, Image Flip, Brightness and Contrast Adjustments, an Audio Meter Indicator, and upgradeable USB firmware. In addition to Pixel to Pixel zoom, it also offers Chroma settings for color saturation and Peaking Focus Assist that aids critical focusing by sharpening the edges and making in-focus objects stand out. Blue Only, which allows you to view the blue channel only, is a professional feature used while viewing SMPTE color bars for monitor calibration. Anamorphic setting helps in viewing an anamorphic image in the EVF Flip-Up Electronic View Finder by stretching out the image. The EVF Flip-Up also has Frame Line Generators with aspect ratio frame lines such as 1.33:1 (4x3), 1.66:1 (15x9), 1.78:1 (16x9), 1.85:1 (35mm theatrical), 2.35:1 (Cinemascope), and a “rule of thirds” grid. Exposure Assist- Zebra Stripes allow setting of 2 separate IRE levels. For example, you can set one for 55 IRE to get a properly exposed skin tone, while the other can be set at 100 to indicate pure white and the point before over exposed signal clipping. The Scaling Function corrects aspect ratios by expanding the image and utilizing the entire width and resolution of the display screen. The battery level indicator can be set to show or not to show on the screen. When set not to show, the indicator will automatically appear when the battery level is down to 10%. Additionally, the Live Menu Preview allows you to see the changes taking place as you select the menu items. Key Features: External Monitor for DLSR Video Shoots 3.2" (8cm) High Res Monitor:384,000 Dots Enhances Stability for Shooting Video Scaling Function 2 HDMI Standard Ports 3 Assignable Function Buttons Brightness / Contrast Adjustments Audio Meter Indicator Black Sun Protection Disk Included
Write Your Own Review
Fllow us
By continuing to use this site you agree to our use of cookies, which allow you to sign in and manage your account, and add items to your cart.
Dismiss
Cookie Settings