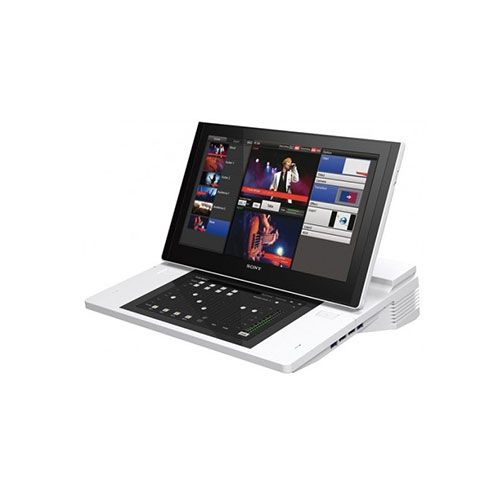 Multi-functional all-in-one solution
Anycast Touch eliminates the need for any of the hardware typically required for professional live streaming. It includes a video switcher, encoder, recorder, audio mixer, titler and remote camera controller. The Anycast Touch allows for seamless video mixing between a number of video sources in a variety of formats. You can record up to four hours of video and audio on the internal HDD, create and add graphics elements to the image, control connected remote BRC cameras (pan, tilt and zoom), perform multiple effects and wipes to enhance the production and instantly stream the output over a WAN or the Internet. Additionally, a fully functioned six channel audio mixer is provided for a separate audio mix.

Intuitive double touch-screen operation
The AWS-750 Anycast Touch has a very simple and easy-to-use operational style with an intuitive double touch-screen interface that requires no technical background to operate. Its tilt screen function enables users either to use the unit as one large flat screen, or tilted, as two dual screens, whereby video and audio controls are split.

Stylish and ultra portable design
The Anycast Touch is stylish, compactand ultra-portable. Taking it from one location to the other is easy. Just pack up and go. The all-in-one style system displays sources for input and streaming, for simple operation.

Internal recorder
The system records PGM output in the built-in 128 GB capacity solid state drive with up to 4 hours capacity. Recorded files can be exported and edited by various types of non-linear editor.

Add still text to any picture