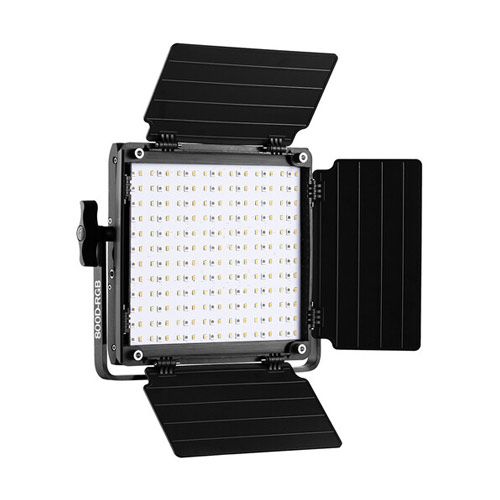 The 800D-RGB LED Studio Video Light from GVM is a versatile 10.6 x 10.3 x 2" light source with two color modes, light intensity control, and power options. The panel has a 120-degree beam angle that can be controlled by swinging one or more of barndoor leaves into the beam path for selective lighting. There are two color modes. The fixture dedicates 168 LEDs to CCT color from 3200 to 5600K. It also has 84 RGB LEDs that allow a choice of 360 colors whose saturation and hue can be tweaked to create myriad custom colors. Buy GVM light from UBMS Dubai. Light intensity is variable too, from 0 to 100% to match the ambient level or serve as an adjustable key light. You can make these adjustments locally on the light, but you can also make them wirelessly by downloading a free app for iOS or Android. The light runs on AC power via the included adapter, but you can also run it on NP-F-type batteries when mains current is unavailable.

Two Output Ways: The first mode is where the color temperature is between 3200K and 5600K. The second mode allows you to adjust the hue output and color saturation of red, green, and blue from 0% to 100%. Which means you can quickly match the current ambient with a knob.

It Consists of 168 LED Beads and 84 RGB Beads: this video light is adopted the American Chip and has a life more than 100000 hours. It's designed with aerospace aluminum alloy Casing to effectively help the LED light to better dissipate heat.

AC/ DC Power Options: LED panel light can use two modes to power, you can use AC adapter and Sony F750/970 battery (not included) to supply power outdoor or indoor.

It comes with an LCD digital display, multiple control modes, stability system, and 360° rotating U-bracket to improve your lighting settings. The step-less adjustment is used to control the brightness/color temperature which brings great convenience to your shooting.