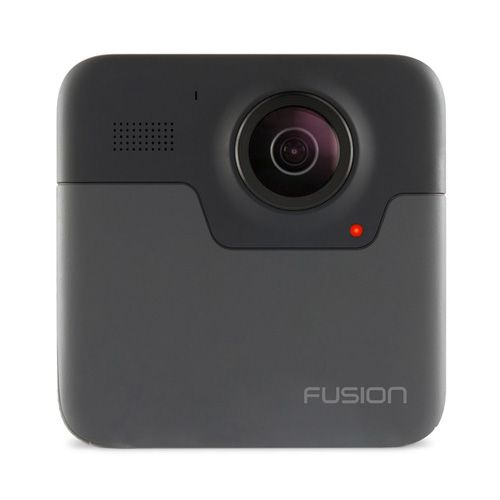 Fusion captures spherical video and photos, recording everything so you can find the best shots later. Play it back in VR or use OverCapture to create traditional videos and photos you can share right on your phone

With ultra smooth stabilization and 5.2K video, Fusion is like having a professional film crew with you wherever you go.

Grant your audiences new perspectives of your adventures with the GoPro Fusion. Using two slightly offset cameras, the Fusion can capture everything that happens around it in 5.2K resolution up to 30 fps. If you're producing content for viewing in VR headsets, 3K resolution at a smooth 60 fps may be more appealing. 18MP photos can also be captured in both raw and JPEG formats for editing flexibility and easy sharing, respectively.

The Fusion's capture resolution may be high, but sharing your videos and photos is not a chore. With the GoPro app, you can play back and share your content right after capture. With OverCapture, you can extract a moveable 1080p or 720p chunk out of your existing 360 video and create a standard HD video, as if you had a virtual tripod and zoom lens with a camera operator.

To complement the Fusion's spherical video, spherical audio is also recorded. Using multiple microphones to capture 4-channel audio, the Fusion can record sounds from all directions. Playback of the surround sound offers an immersive sonic experience to go with the spherical video.

Capture incredible spherical video of everything around you by shooting in every direction at once.

Control + Create With the GoPro App

Use your phone for shot preview and playback, OverCapture, editing spherical videos and sharing

Play back spherical footage that brings everyone into the moment with you.

Immerse yourself in your VR content without stitch lines getting in the way .

Fusion is waterproof down to 16ft (5m) without a housing .

The ultra versatile Fusion Grip was specially designed for shooting VR at just the right angle and distance. The built-in tripod and extension pole help you set up and change shots on the fly.