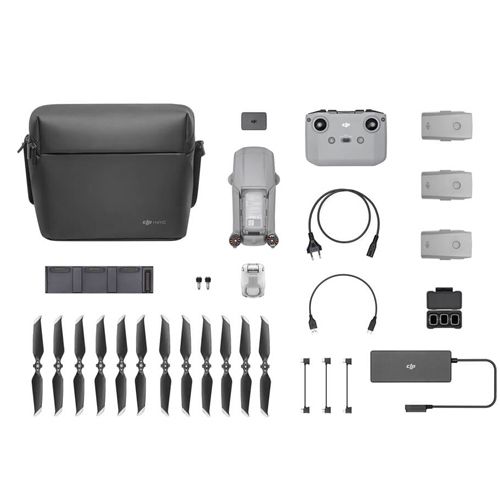 A midrange drone with flagship features, the DJI Mavic Air 2 combines a foldable and portable frame with a high-end camera system. The 3-axis gimbal sports a 1/2" CMOS sensor capable of capturing 8K Hyperlapse time-lapse shots, 4K60 video, 240 fps slow-motion 1080p video, and up to 48MP stills. In addition, both photos and video can be captured in HDR for more dynamic results. All your footage can be saved to 8GB of internal storage and on optional SD cards up to 256GB in size. UBMS can provide DJI Mavic 2 Flmore combo with best price.

Helping you capture all this stunning footage is a host of built-in tracking technologies and intelligent obstacle avoidance. FocusTrack combines three different tracking features with abilities that include tracking of subjects and following predetermined flight paths. The Advanced Pilot Assistance Systems 3.0 (APAS) is aware of the Mavic Air 2 in 3D space and its proximity to people and objects to help avoid accidental collisions. Return to Home (RTH) and precision landing options are supported so you can easily and safely retrieve the drone when you finish filming. Get Mavic Air 2 Fly More Combo in Dubai from UBMS.

Mavic Air 2 supports normal video at up to 4K/60fps and HDR video at up to 4K/30fps. Slow-motion videos are available in 1080p with up to 240 fps (8x slow-motion). Mavic Air 2 offers D-Cinelike as a flat color profile. Normal photos can be taken in 12 MP or 48 MP, and RAW format is also available for more advanced editing. Mavic Air 2 supports QuickShots, Hyperlapse, and FocusTrack. You can either update the firmware over the DJI Fly app or the DJI Assistant 2 for Mavic desktop software (available for Mac and Windows). Both can be found on DJI's official homepage.

A robust 3500mAh battery can keep the Mavic Air 2 flying for up to 34 minutes at a time. While in the air, you can fly the drone at speeds up to 43 mph up to 11.5 miles away. The included remote controller supports OcuSync 2.0 technology to provide you with flight telemetry data and a live view of what the drone sees on your attached smartphone. It can transmit up to 1080p quality video from up to 6.2 miles away. Altogether, the Mavic Air 2 gives you the tools you need to expand your filmmaking with creative and professional quality aerial footage. Visit UBMS Dubai for getting more information and best price for Dji Drones .

ActiveTrack 3.0: Follows a target while avoiding obstacles and can reidentify targets if lost.

Spotlight 2.0: Fly freely while locking the camera on a subject.

POI 3.0: Creates an automated path to fly around a target while keeping the camera centered

With a single tap. you can use your Mavic 2 Pro to capture stunning time-lapse shots in Hyperlapse mode, processing everything automatically and saving you time in post-processing. You can even simultaneously save photos in JPEG and RAW on a microSD card (not included). Hyperlapse shots can be captured with four distinct modes:

Free: Move the Mavic Air 2 where you want with total freedom.

Circle: Lock onto a subject and the Mavic Air 2 will circle it while continuously capturing footage.

CourseLock: This locks the gimbal onto a subject, automatically turning to keep it in frame as you fly towards and past the subject.

WayPoint: Set a specific, savable flight path (up to 5 points) in 3D space for a single time-lapse, or for multiple shots at different times to edit together later.

Mavic Air 2 has three flight modes, plus a fourth flight mode that the aircraft switches to in certain scenarios. Flight modes can be switched via the Flight Mode switch on the remote controller.

Sport Mode: In Sport Mode, the aircraft uses GPS for positioning and the aircraft responses are optimized for agility and speed making it more responsive to control stick movements. The maximum flight speed is 19 m/s. Obstacle sensing is disabled in Sport mode.

Tripod Mode: Tripod mode is based on Normal mode and the flight speed is limited, making the aircraft more stable during shooting.

The aircraft automatically changes to Attitude (ATTI) mode when the Vision Systems are unavailable or disabled and when the GPS signal is weak or the compass experiences interference. In ATTI mode, the aircraft may be more easily affected by its surroundings. Environmental factors such as wind can result in horizontal shifting, which may present hazards, especially when flying in confined spaces.

Low Battery RTH is triggered when the Intelligent Flight Battery is depleted to the point that the safe return of the aircraft may be affected. Return home or land the aircraft immediately when prompted.

DJI Fly displays a warning when the battery level is low. The aircraft will automatically return to the Home Point if no action is taken after a 10 second countdown.

The user can cancel RTH by pressing the RTH button or Flight Pause button on the remote controller. If RTH is cancelled following a low battery level warning, the Intelligent Flight Battery may not have enough power for the aircraft to land safely, which may lead to the aircraft crashing or being lost.

The aircraft will land automatically if the current battery level can only support the aircraft long enough to descend from its current altitude. Auto landing cannot be canceled but the remote controller can be used to alter the direction of the aircraft during the landing process.

If the Home Point was successfully recorded and the compass is functioning normally, Failsafe RTH automatically activates after the remote controller signal is lost for more than 11 seconds. The aircraft will fly backwards for 50 m on its original flight route, and then enter Straight Line RTH.

Write Your Own Review
or how about these?
Fllow us
By continuing to use this site you agree to our use of cookies, which allow you to sign in and manage your account, and add items to your cart.
Dismiss
Cookie Settings