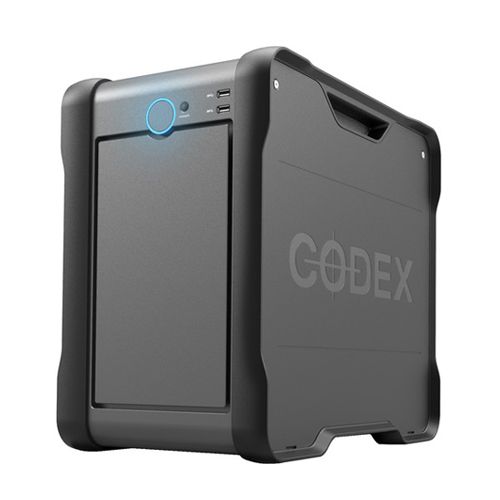 Bogged down by shrinking drives and slow network access? Super-size your storage and stay connected with the Media Vault 144TB 12-Bay NAS Server in a 12 x 12TB configuration from Codex. Featuring a total capacity of 144TB divvied up between 12 3.5" 12TB HDDs, this NAS array also sports a 3.6 GHz Intel Zeon W-2123 Quad-Core processor and 128GB DDR4 ECC RAM, translating to 1000Mb/s read and write times allowing you to complete your work in less time. Additionally, the Media Vault includes two 2.5" SSD drives for parity, ensuring your data remains safe in the event of a drive failure.

Complementing its storage space and processing speed, the Media Vault boasts four RJ45 ports supporting 10-Gigabit Ethernet. Users can take advantage of two USB ports on the front panel of the Media Vault to attach a keyboard and mouse for administrator set-up tasks. However, these ports can also be used to charge phones and tablets. Designed to accept media uploads over a network connection, data should first be uploaded to a host computer before being transferred to the Media Vault via a network. Featuring a web-based interface, this NAS server is compatible with macOS, Windows, and Linux.

Designed for the Desktop

Deployed in a desktop form-factor with styling intended to compliment client-facing workstations, the Codex Media Vault is designed to look and feel at-home in professional spaces.

Create, manage, and support multiple users and workgroups using a web-based interface that works across multiple operating systems, including macOS, Windows, and Linux. You can also use this interface to monitor your system status or manage user accounts and file systems.

You can widen network bandwidth when you swap the four 10-Gigabit Ethernet ports included in the standard configuration for one 40-Gigabit connection as an optional upgrade.